A foul-smelling hidden room blanketed in darkness, proof that it had been untouched by humans for a long time.

I coughed from the dust which got into my mouth and nose. Still, I felt a sense of excitement.

Please let the thing I longed for be in here. As I looked carefully through the dark room, I spotted an ancient-looking wooden box. I approached it cautiously and touched the dust-covered box. As my fingers made contact, something popped out with the sound of rushing air.

I backed away in surprise and made some distance with the box as I saw a snake pop out.

But strangely, this snake had white eyes, like a snowy field. When I looked at those pure white eyes, fear filled my body. Suddenly, the fact that there was not even a single rat in this room makes perfect sense.

The snake continued to threaten me with its hissing sound and flitting tongue. It was trying to stop me from getting to the box.

I resorted to swinging the torch in my hand at the snake. Its heat, as well as the sparks that fly off of it, should scare the snake away.

But even as the torch in my hand moved, the snake did not budge. Instead, it continued to stare at me with its pure white eyes.

Does this snake not fear fire? I decided to use the sword at my waist instead, and as I reached for my sword.

However, perhaps feeling the threat, the snake bowed its body and quickly disappeared as it escaped somewhere.

I breathed out a sigh of relief. Catching a snake wasn’t tough, but its snowy white eyes made me feel uneasy. Before the snake decided to come back, I quickly opened the box.

There was something within it! A yellowed piece of paper that looked like it would tear at any moment with just a touch.

Well, it must have been here for around 600 years, but even though there had been a change in color, something seemed to have been done to treat the paper to keep the writing intact.

But I was not sure that this was what I was searching for. There was something odd about the content of the paper.

To know the true essence of the Sword Immortal I had come all this way… but was this really the treasured book?

Moreover, the paper contained creepy and strange patterns drawn with red ink, just like the writings of the Demonic Cult.

Well, my goal was to get rid of the blockages in my body. That way, I can return to being a child of a noble clan instead of remaining a spy.

Even if I was treated like trash back then, it was better than living like a spy now with fear and concern at every moment.

All I would have to do is call Elder Baek Wei-hyang and the head of Yellow Dragon Hall, Moyong Soo. But there was work to do before I did that.

I pulled something out of my arm. It was a pill about two inches in size, made through special methods.

I am annoyed. There is a crack on the pill.

It must have been from when I slipped as I climbed the cliff.

Luckily, the pill did not shatter. I carefully folded the paper containing the sword technique and placed it inside the pill.

I’m not sure if I can swallow this. Still, I opened my mouth and put the pill in, forcefully gulping it down as I regretted not bringing water with me. The scent of the pill almost made me puke.

It felt like eating dried, rotten old tree roots. The reason I chose to swallow it was simple. This was my countermeasure.

No matter how much I was told that I would be helped, as long as they were warriors, they would covet this.

Soon after swallowing the pill, I headed to the back of the room and opened a stone door. I then went towards the cavity in the middle of the cave and knocked on the wall.

It was a signal code to the Murim Alliance. The average warrior might not be able to hear such small knocks. Still, the signal would be audible to Elder Baek Wei-hyang, who was known to be one of the Five Great Warriors of the Murim Alliance, and the skilled Moyong Soo.

Not surprisingly, the two appeared shortly.

A middle-aged man with broad shoulders and a handsome beard. He was Baek Wei-hyang, an elder of the Murim Alliance.

The young man standing next to him with sharp eyes was Moyong Soo, the eldest of his family.

At the sight of both of them, I smiled.

The two people’s faces brightened at my words. There was nothing else here for them but that, the treasure of the heavens, and it was easy to know their feelings even without words.

Moyong Soo, the head of Yellow Dragon Hall, asked me.

“Where is it? The Record of the Sword Immortal?”

“Before that, make sure to keep the promise you made.”

A promise to remove the blockages in my body. I heard that Elder Baek Wei-hyang’s deep understanding of the body’s meridians can help restore a clear flow of qi to my body.

I felt slightly sorry as they trusted me, but as a spy, I had to ensure I got what I was promised. Elder Baek Wei-hyang then smiled.

“Hahaha. Right. That is true. We need to do it right.”

He then glanced at Moyong Soo. The man who is Head of the Yellow Dragon Hall then pulled out his sword from his waist, its blade covered in a purple glow.

It was the Fame Dagger of the Moyong family. As he suddenly drew his sword, I backed away in shock.

“What are you doing?”

Moyong Soo aimed the sword at me. If I didn’t move back right away, he would have stabbed me right then.

My heart was pounding in shock at this, but I, who have lived with such anxieties, won’t be so obedient to threats.

“If I give this, will the blood clots in the body be removed?”

“Well. Is there any reason for me to keep you alive?’

Ah, for real? I was going crazy here. These two were blinded by the Sword Immortal’s technique.

After obtaining the treasure, they planned to kill and annihilate my traces immediately.

“Are you going to break the decree that you must not indulge your personal feelings or greed for the mission of the Murim Alliance?”

“No one will even know, so what is the use of that?”

“What could be the problem if a spy dies? Rather, the lord will be praising us for handling the spy without causing trouble.”

This was why people cannot be trusted. They would show that they were simply forced to kill a spy in this manner and use it as their defense.

“What if I keep my mouth shut? Did you forget that not just you but there are other warriors sent here? This is a situation where you would go up against the whole alliance.”

People were already up searching the cliff, and they would soon figure out that there is a cave in here and that it held the treasure. At those words, Moyong Soo’s eyes fluttered in hesitation… but the elder Baek Wei-hyang remained unperturbed.

“It looks like you want to use your head, but it won’t work. And you know this isn’t a situation where anyone would openly fight.”

“The treasure is hidden in one of the many hidden rooms? Don’t try to overthink it. We can always just say you tried to deceive us and hide your body here.”

I was at a loss for words. I tried to think but was unable to. The reason was simple.

“Did you think this elder wouldn’t see through this?”

At this exact moment, my supreme disadvantage was that I am just a third-rate warrior with no internal qi.

Even if someone deliberately tried to investigate who had been in this room, they wouldn’t know me. It would be twice more difficult since an elder was involved.

“We can just rip him apart. Elder. Hehe.”

Moyong Soo smiled. Now, his appearance was more similar to a greedy man.

Nothing else to do!

I knelt down and begged for my life.

“Please spare me. I will keep my mouth shut for the rest of my life. To kill a third-rate warrior like me….”

“You read it right?”

“You read that, right? The sword technique.”

I couldn’t say anything. If I hadn’t read it, how would I know about the record being the right one? The most unfortunate thing was that there was absolutely nothing in the record that could even be called special.

“That is another reason you should die.”

It was a moment that my heart had always been worried about.

The sword of Moyong Soo pierced my chest. Right, these people never had any intention of saving me.

Blood flowed down from my mouth, and I fell to the ground like a doll with its threads cut.

From the moment I was given this mission, the Murim Alliance and the others had decided my fate.

My body began to lose strength as my mind wandered. To die like this…

Elder Baek Wei-hyang said casually. Did this guy think I was a pig that could have my stomach cut open so easily?

Moyong Soo pulled his sword out of my chest and thrust it into my stomach.

I could hear the sound of something being crushed inside my stomach.

Moyong Soo seemed to know about the pill that I had swallowed. He, too, must have felt it, so he was trying to quickly bring the pill out of my stomach. He must be afraid that the acids in my stomach would destroy it.

A strange thing was happening. Hot energy rose up in my stomach, and blue flames soared from inside.

Flustered, the man stepped back. 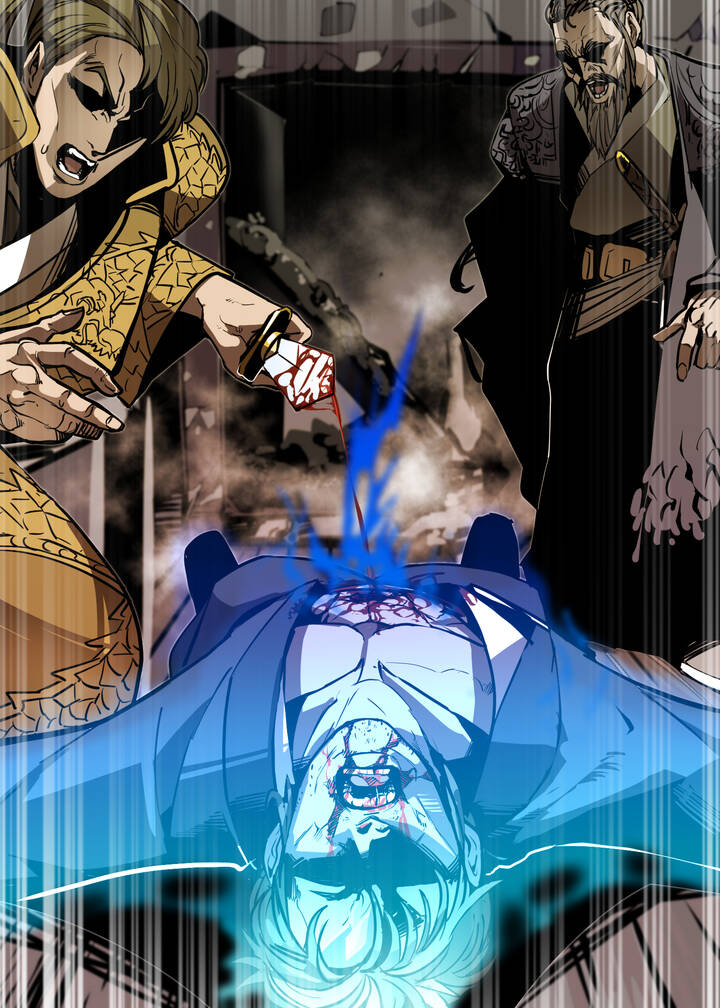 “What are you doing! Get it out of the stomach!”

At Baek Wei-hyang’s cry, he tried to come close again, but it was of no avail. All of a sudden, my entire body was engulfed in flames.

But it was strange.

This should have been painful, but it wasn’t. Was it because my body is dying?

“Shit! Why isn’t the fire going out!’

Moyong Soo cursed while I gradually could hear nothing.

As my thoughts considered my impending death, I began to regret everything. Why did I live my life like this?

As my eyes gradually were engulfed in blue flames, it turned white, and then something wet covered my body.

Did someone pour water to put out the flames? The sensation startled me, causing my body to jump.

As soon as I got up, I remembered something wet covering my body, and I looked at my hands and feet.

I’m completely fine. Even my stomach had no visible wound. I couldn’t figure out what just happened.

The sound of laughter.

When I looked up, I saw two boys in colorful silk robes, both about 15 years old, looking down at me and laughing.