A large ship floated by the pier, its subtle light shining over the night fog.

A handsome man stood on its deck, drinking.

“Have some of this.”

A middle-aged man wearing a black hood sat across from him and politely held out his glass.

“It is an honor to have you here. Fourth Blood Star.”

The handsome man was the Fourth Blood Star, Do Jang-ho.

The man drank from the glass and said, “I came here for all of it.”

“I was thinking of seeing your face since I haven’t seen you for so long.”

The man under the hood could not hide his doubts at those words. Do Jang-ho saw his reaction, sighed, and smiled.

“Well, it is no big deal. There’s just one person I am curious about. It is a pity since it has been a while, and I did want to see Hwang hyung.”

“Even the Fifth Blood Star will regret it.”

The middle-aged man under the black hood was a Commander named Mun Yul, the person in charge of the troops serving under the Fifth Blood Star.

He then filled the glass again and asked.

“The opponent is none other than Ghastly Monster.”

At those words, Mun Yul grinned.

“Do not worry about that. Even if it is the Elder, he will not be able to do anything once he gets poisoned.”

“The Crazy Demon is also there, along with twelve skilled warriors and twenty mid-level ones.”

It was a situation where he had dispatched a sizable force, and that was why Mun Yul felt this laid back.

Do Jang-ho then said to him, “There are always variables. Do not be careless.”

In the end, Mun Yul just decided to nod.

Just then, someone with a mask jumped onto the deck.

“Commander. We have a problem.”

Mun Yul jumped up and asked.

“Do you think the Fourth Elder has evaded the poison?”

At those words, Mun Yul couldn’t hide his relief.

He didn’t care about anything else. The Ghastly Monster himself was the largest variable.

“Then what is the problem?”

“The Crazy Demon was defeated.”

Seeing how Mun Yul was surprised, Do Jang-ho was also disappointed. As a person under the Fifth Blood Star, Mun Yul might be feeling ashamed currently.

“If it wasn’t the Fourth Elder, then who did it?”

“The disciple of the Fourth Elder.”

He couldn’t believe that the Crazy Demon was taken out by that young kid.

“Yes. The Elder’s disciple, along with an unknown person, is blocking entry to the house and guarding it. We tried to capture them alive, but the casualties were increasing on our side.”

The order to bring So Wonhwi back alive was holding them back. It was clear that those two were guarding the house while the Ghastly Monster tried to recover.

The more they waited, the more dangerous it would become.

“You fools! Then hurry…”

Mun Yul was about to move when the Fourth Blood Star stood up.

Mun Yul’s face brightened as someone dependable would be coming with him.

I managed to defend against the masked men whose swords aimed to stab me through the chest and throat simultaneously.

I kicked him in the chest and pushed my sword into the middle of his forehead.

He stumbled back and fell down. I tried to deal with the others as well, but the masked people were moving like shadows from different directions, forcing me to avoid them using footwork.

After more than ten of them had died to my sword, the rest were more cautious in attacking.

It must be difficult since they had been tasked with capturing me alive.

I didn’t know how much time had passed, but this felt so long.

Hearing Iron Sword’s voice, I jumped up using footwork and released Short Sword with my silver thread at the top of the building.

Short Sword flew like an assassin’s dagger and pierced a masked man’s thigh.

In that state, I pulled back the thread.

The masked man who had been trying to infiltrate the building held onto the roof to stop his movement, but it was futile as he was dragged down.

At the same time as I pulled back the string, I swung and threw the masked man using Short Sword that was lodged in his thigh. He swung like a pendulum as I threw him to another of his comrades.

Wasn’t he one of their own? The other masked people should have caught him, but the rest simply avoided him.

Was it because this wasn’t a game? Thanks to that, the one I threw turned limp.

My breathing was turning a little rough.

In terms of skills, I was better than them individually, but the fact that there were too many of them was distracting.

‘Will Miss Sima be alright?’

I heard the sound of the fierce clashing of metal from the other side. I could guess that she was still doing fine from that.

If either of us gets hurt, we would be done.

Hae Ack-chun was our only way to win. To do that, he needed to dispel the poison.

They were trying everything to overwhelm me by targeting the blood points at the elbow joints, between the left shoulder, armpit, and knee.

They were all points that halted movement.

I used the loach-shaped sword technique and blocked their attacks in a frenzy.

As soon as I used the disguised movement to aim for a masked man’s head, I heard Short Sword’s yell.

Five assassin needles flew at me and were stuck to the wall as I tilted my head. The masked man who used them looked at me as if I just did something absurd.

“It isn’t like you can have eyes all over the place.”

But I did have eyes all over the place. I was safe with the two swords constantly looking after me.

Even so, I was definitely losing focus. Running forward to kick their asses would have been a lot easier.

‘It is becoming harder to protect them.’

My mouth became dry at the sight of all of them moving again. We didn’t have a chance of escaping if things didn’t proceed as planned.

On the other hand, we couldn’t let them get out of our sight either. They aimed to enter the house and subdue us using any possible method.

There was no answer other than to reduce their numbers.

I then felt a sharp stabbing feeling surge in the air. Someone or something with a distinctly different feeling from these masked people was approaching.

At that moment, the people separated as two men without masks appeared. More came after them, but my eyes were stuck on one particular face.

I couldn’t help but be surprised at seeing the white leather strapped to his sword. The handsome man then said, “It has been a while, disciple So.”

The first of the Blood Stars that I encountered in this life.

His presence was still as strong as he was then.

‘To see a Blood Star here.’

It was downright disheartening. Hae Ack-chun had yet to finish cleansing the poison, and if this man joined the fray, then…

“… I greet the Fourth Blood Star.”

I lowered the tip of my sword and placed my hands together in a bow. He then smiled.

Sorry, but I didn’t miss you at all. He then continued.

“This is quite a surprise. It wasn’t enough for you to become an Elder’s disciple with a body that couldn’t learn martial arts. To think you can perfect it to this extent.”

He genuinely seemed to be speaking to me in admiration.

“I understand the lady wanting you.”

Wait, I could probably use this situation and drag some time out. The moment I thought so, however, he spoke to the other man next to him.

“Commander Mun, leave this to me and handle the Elder.”

The man named Commander Mun and the other masked people tried to move past me and enter the house.

As expected, there was no more time left. If I had to fight the Fourth Blood Star, then there was no way I could stop the others.

Once that happened, it was game over.

My head became messy as I heard the sound of laughter.

-This is so much fun!

At that moment, a thought flashed in my head. If Hae Ack-chun was subdued, then things would inevitably get worse.

At my shout, all of them paused as I drew out the Blood Demon Sword.

Seeing the sword, Do Jong-ho narrowed his eyes. While looking at the sword in my hand, he turned to Commander Mun, who laughed.

“It is an imitation sword. I received a message that the lady has the real thing.”

And Do Jang-ho smiled in return.

I looked at Commander Mun and said.

“Hahahaha. I tried to treat you nice because you are the Fourth Elder’s disciple, but you say such absurd things. If that is the real Blood Demon Sword, how can you even hold it?”

I threw the sword at the man, and he caught it.

All of the masked men and Do Jong-ho were shocked at this.

Commander Mun tried to remove the sword with his left hand, but I used the silver string to pull the sword back first.

The sword, pulled by my strings, returned to my hands. Commander Mun then looked at me with a pale face.

“I did nothing! Do you still have the mouth to say that after touching the real Blood Demon Sword?”

The masked men looked agitated, and I think I knew why.

It was a known fact that the real sword could not be held, and they witnessed its effects.

“I think everyone knows what it means to hold the Blood Demon Sword, Fourth Blood Star?”

Everyone turned to him, and he took a step forward.

“How would I know if the sword has poison in it or not?”

So this was how he was going to act.

Then there was my last option. I held the Blood Demon Sword and concentrated on the flame of mindfulness.

At that point, the fourth point of the Big Dipper on my hands shone as I triggered the Heavenly Authority, and the light was dyed red.

As I was hoping it would work, I could hear the masked men mumble.

“It is turning red.”

The change didn’t stop there as even the blade became red.

Do Jang-ho’s eyes, which had been calm, were now trembling. 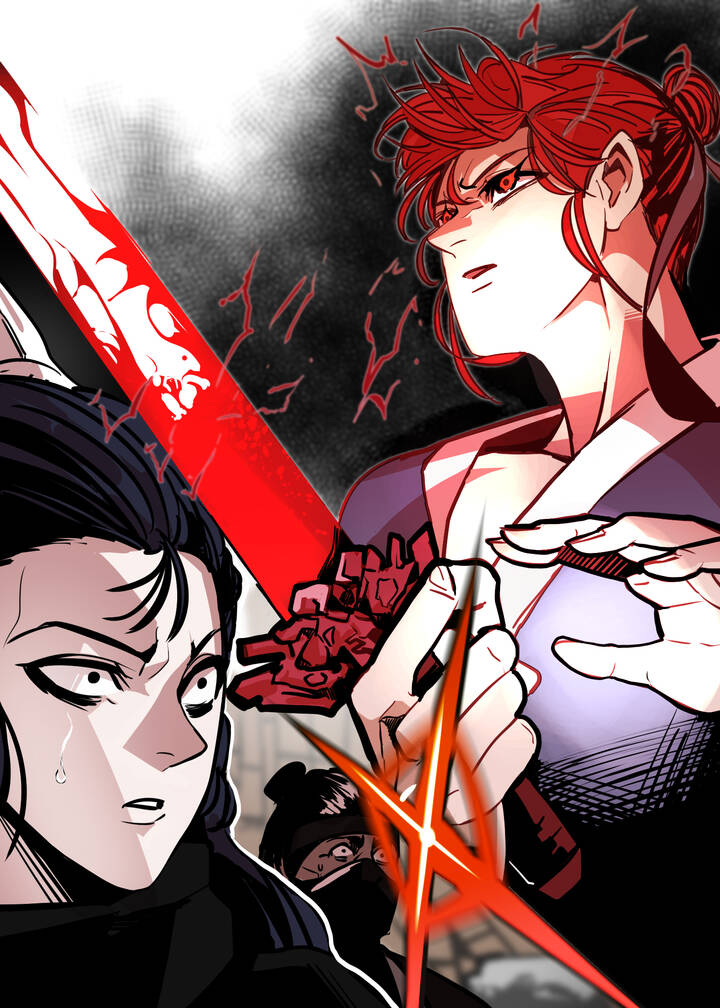