Could it be that Sima Young was talking about the fact that I was being targeted by both the sisters until just a while ago?

-Must be so. You declared that ‘I am Blood Demon’ with your mouth, so do you think those girls are stupid? I don’t know if something will happen in the future, but it might be a good time. Sima Young is the only one who can take advantage of this situation.

Baek Ryeon-ha was waiting for me to deliver the Blood Demon sword to her. Now I would have to tell her that I chose to keep it?

-What can be done? My Wonhwi, life is full of hardships.

Even so, the situation right now was utterly twisted. I wanted to cool my head off, but Sima Young’s appearance sent my head into a further frenzy.

“I guess it is nice to travel the Yangtze River on a boat like this.”

She said this with a smile, although we could not even see the water flowing through the fog and darkness. What was so good about this?

I glanced at her.

She was smiling and enjoying this moment, as Iron Sword said.

-My former master said a woman looks beautiful just by being with the person they like.

Sometimes I think about meeting Iron Sword’s former master. I wonder if there was anything that he didn’t know about.

“Vice commander, should I call you Blood Demon?”

“… anything other than that works.”

“Anything else is fine?”

“Then can I call you the young lord?”

“That would be better.”

Even so, it felt burdensome as the other sect members on the boat turned towards me. It seems that the Vice commander felt like a pleasant option for me.

-Right. You were abandoned by your home before returning. You were kidnapped by the Blood Sect and died while living as a spy. But isn’t being the Blood Demon the top position?

-Right, human. Be honored that this body was chosen by you.

Where was the honor in this?

I was about to lose my temper because of Blood Demon Sword’s words, but then Sima Young said.

“The young lord always changes your expressions when you are alone.”

It seemed like my expression was changing as I talked to the swords. I thought I didn’t let it show much, but this shocked me.

“You just made an angry expression on your own and then smiled, then smirked. It was fun…”

“Miss! That is because I have thoughts of my own…”

I turned my head to make an excuse but found myself facing her directly. I didn’t know she was looking at my face.

Even though it was dark, her pure white face, now free of the mask, was clearly visible. It was a truly beautiful face.

We were sitting next to each other, and as we looked into each other’s eyes, I heard her loud breathing.

I saw her flushed face and wavering eyes.

My heart was beating strangely when I heard her voice. If she kept looking at me like this, no matter how much I tried to control my emotions, they were bound to be shaken if one was a man.

I unknowingly gulped, and she smiled before saying, “Are you nervous right now?”

“You are not nervous even though you gulped?”

“Gulping is a bodily function. If there is saliva in the mouth, we gulp…”

“Why is the mouth gulping? There is no food in the mouth. So your mouth must be watering while looking at me?”

She was speaking too clearly now! She then smiled as I struggled with my complicated thoughts.

“I guess what father said was a lie.”

“He thought anyone would fall for me if they were facing me this close. But it doesn’t seem like the young lord was nervous at all.”

That definitely felt a bit sarcastic.

Miss… your father’s were true, but I think he forgot something.

He should also have told you that no one would have the audacity to act like that once they knew your father’s name.

From her point of view, I might be unique. It was because I was showing restraints to her genuine emotions.

-What restraint? You are just too afraid.

Damned Short Sword. Did she have to point that out?

-Scared? Who can scare you when you have me?

The Blood Demon Sword asked this in curiosity. To this, Short Sword replied.

-One of the Four Great Evils is her father.

-A famous warrior then. Is the person who was chosen by my body rejecting the woman because you are afraid of that? You are a pitiful one. If you really want to be with a woman, just pull her by the neck and slap your lips onto hers, and then the atmosphere will be insanely–

How can you say such things? This guy was worse than Short Sword!

“Young lord. What are you so flustered about?”

I was a bit taken aback by her words, but I answered without expressing it too much.

-Keep in mind. The body…

I then made sure I couldn’t hear his voice. I should have done this a long time ago. At the same time, Sima Young blinked and looked at me.

“Why is someone who says that it’s nothing looking at my lips?”

She moved and touched my neck.

“What are you doing? Miss…”

“It is fine. I am also looking at the young lord’s lips.”

I was scared to ask and tried to move, but she pulled my neck closer and brought our lips together. I could feel her soft lips on mine. 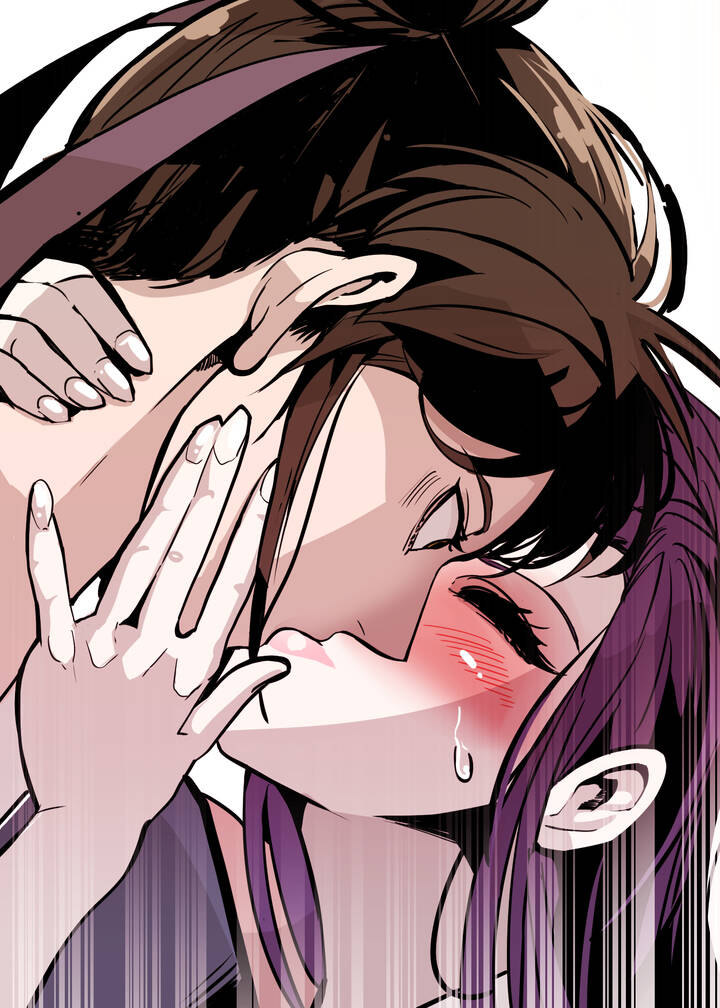 In an instant, her face became flushed red, and she parted her lips to let out a hot breath as she said.

I was speechless at her boldness.

-A fast-paced woman, huh? Not bad. Wonhwi. My former master will be jealous… no, he, too, would have thought this to be odd.

The voices of the idiots continued to ring in my head, but I didn’t care. This was my first kiss.

She covered her ears and refused to listen to me. I frowned at her actions.

She didn’t want to listen to what I was saying.

For a moment, she felt very cute to me, and I chuckled. Her face flushed even more as she looked at me and ran away.

Did she do something to be that ashamed of?

I couldn’t agree with Short Sword’s words… but I couldn’t deny them either.

However, I felt a presence and turned around, only to find a trembling Song Jwa-baek standing there.

It might be because of the sudden kiss. It must have made me too distracted to detect his presence until he was this close.

I coughed and asked.

This guy was releasing his anger like a madman. When he told me that he had seen all of it, I found it hard to make eye contact with him.

“You’re suddenly treated like the Blood Demon because you inherited his blood! And then with Miss Sima! Those lips! Like that! AHHHH!”

It seemed like he was quite pissed off. Actually, this guy did show a liking to her since their first meeting.

He was trembling in anger.

“You do all the good things alone, you selfish bastard!”

“I’ll just watch you get a huge belly since you’re walking alone and eating all the things yourself!”

“Fuck. I would have gone for the girl I wanted fairly if it were me!”

“Don’t say such things to the Blood Demon…”

“Fuck! Then give the order for me to die! Wouldn’t that be good!”

However, his actions didn’t change and stayed the same, which made me feel at ease. Once he was done cursing to his heart’s content, he looked drained and said.

“The emotions between men and women are something one cannot control. There is no use being sullen. And even if you became the Blood Demon, it has to be fate, and I will ignore that too. It will be alright to me if you make me your right arm…”

“I will make you the Guardian.”

He didn’t seem to have expected to hear those words from my mouth.

In the first place, there was no position of Guardian in the Blood Sect. It was a different role.

“I don’t know if I will be the Blood Demon…”

“Yah. You just said you are the Blood Demon with your own mouth. And with the teacher backing you, people will come forward to help you.”

The words which came from him surprised me.

I just looked at him blankly and decided to be honest.

“Honestly, I am not sure about what to do. This wasn’t something I thought about. I was just thinking of escaping the crisis…”

“Then you will ignore it, despite it being something that happened without your intent?”

“Is that such a complicated thing?”

“If there is something you do not like, isn’t it possible to just be the Blood Demon and fix it the way you want it?”

This guy was giving easy solutions that only suited him. Did he think the highest position in the sect was free to do whatever they wanted?

“… are you saying that you realize what it means for me to become Blood Demon? I will have to fight against Lady Baek Ryeon-ha…’

“Then you shouldn’t have declared yourself even if it meant death.”

Now I had nothing to say, and he sighed.

“If this is going to continue, then do not show weakness. If we are going through with this, go forward with a calm mind. Fuck. This isn’t my problem!”

Hearing his words made my stomach churn. To think a day would come when I would be taking his advice.

Is this what it means to be friends with people you had been with since childhood?

“Are you really Song Jwa-baek?”

He touched his hair and pushed it back.

“Stupid. Does it sound like I intended for it to be funny?”

He shook his head and said.

“Teacher has something to tell you, so come to the cabin alone. Now that I delivered the teacher’s words to Blood Demon, this small role man is leaving.”

He was just that kind of guy.

He stopped when I called him.

“With your current skills, you cannot be the Guardian.”

“Then how skilled should I be?”

“Shouldn’t you at least be a Blood Star if you want to protect the second leader?”

He turned his head and declared.

“Woo-hyun and I will be the right and left Guardians of the sect leader.”

A bold declaration. Having the twins on my side would surely be a good thing.

“If you become Guardian, when we are alone, you get to talk normally to me.”

He grinned at this

“Until then, don’t drop the honorifics at all times and don’t get caught by the teacher.”