A member of the sect standing on deck yawned. The dark brown member sitting next to him scolded.

“If you are so sleepy then pinch your thighs. Don’t fall asleep and neglect your duties.”

“I haven’t been getting much rest in the past few days.”

“There is just another 30 mins left for your shift to end, hold on till then.”

“I will die. I don’t know what I am even doing on the ship. Even if we move through the canals, we might be able to see anything approaching right away.”

“You are complaining now… uh?”

The members stopped talking and looked in a particular direction. They even frowned as they looked at something, and the dark browed man asked.

There was no ship in the direction he was looking. But there was a ripple on the water. And ripples occurred after every two steps.

Surprised by this, they moved closer to the deck to stare at the waters. Something was getting closer, something strange enough to not be considered as fish moving above.

It was the moment both of them were shocked.

The moment the shadow arrived closer they could see it was a human. One of the shocked people blew the horn.

The moment he placed the horn in his mouth something pierced through his forehead. The other member caught him, but he was already dead.

The moment the shocked person was about to shout, something flew in making him feel like he was about to fall along with the dead person when someone caught them.

It was an unknown monster wearing a black robe.

His face was as pale as a ghost, enough to scare people.

Even if he wanted to shout he couldn’t do it anymore as words emerged from the mouth of the unknown monster.

[Where are Ghastly Monster and So Wonhwi on this ship?]

Everyone turned their eyes at Sma Young’s shout as it was flustering times.

The situation was getting rather complicated even before she had come, so this only heightened the complexity.

“Captain Sima. Get out of here right now. This does not concern you.”

Normally captains or members of the sect would be frightened if a Blood Star said such words, but this was Sima Young.

Han Baek-ha raised her eyes at the response. Even Baek Ryeon-ha’s face, which was blushing, began to turn cold.

“This is the last warning. This does not concern you, you are intervening in the matters of the lady. If you do not back down then you will be punished…”

“There is a saying that if the water looks clear for the eyes above then it means that the water is clear near the bed level too.”

“I’d rather not speak to the Sixth Blood Star who had just threatened the Blood Demon to talk to me about my position and rights.”

Han Baek-ha went speechless at this. It was because Sima Young was not wrong.

Han Baek-ha and I were truly in a verbal war.

Sima Young drew her sword and aimed it at Han Baek-ha.

“Get away from Blood Demon right now.”

-Hahaha. As I thought, Sima Young!

It didn’t matter if she liked Sima Young, now wasn’t the time to celebrate her deeds. Han Baek-ha had this expression which portrayed the situation as ridiculous.

“I warned you to not interfere.”

With those words her hand stretched out for Sima Young.

I kicked her wrist right then and there.

Thanks to this, the hand pointed upwards.

Something like a sharp dagger had protruded from her fluttering black robe. A little late and the dagger would have moved for Sima Young’s throat.

‘To imagine she would use assassin tricks.’

I was getting enraged when Baek Ryeon-ha approached Sima Young.

“Miss Sima. I knew enough about the loyalty that you have for Blood Demon. I will handle this situation so withdraw your sword.”

She was talking rationally, but her voice sounded cold.

It seemed that she was enraged that one person of the sect, a captain, had aimed their sword at Han Baek-ha, her subordinate.

But Sima Young didn’t pull back.

“Ask the Sixth Blood Star to let go of the Blood Demon first and the right punishment for her sin.”

The look in her eyes was similar to when she scolded Sixth Blood Star in the Six Blood Valley when she didn’t follow her words.

“You are considering my words to be light?”

“Am I being careful about the protection of Blood Demon coming off as a laugh at your words?”

Baek Ryeon-ha bit her lip at these words.

She was trembling in anger as she told to Han Baek-ha without turning her hand.

“I said to let go of the Blood Demon. Or do you wish to be punished by my own hands!”

Han Baek-ha was shocked at the angry tone of Baek Ryeon-ha and she just continued to stare at Sima Young.

“Good then. Now put the sword away.”

“The Sixth Blood Star has not withdrawn her hand yet.”

“You keep crossing all lines.”

Saying that, she immediately moved, narrowing the distance with Sima Young and with her blood stained hands, she moved.

In response, SIma Young didn’t back down but moved her sword.

In an instant both women began to collide violently and Baek Ryeon-ha’s fingers being protected by the Blood Hand Arts or Bloody Hand Witch were giving out a metallic sound with a clash.

In an instant, Sima Young kicked Baek Ryeon-ha in the knee making her lose the balance and Sima Young went to stab her right in the neck.

Baek Ryeon-ha slashed the sword up with her hand and threw herself back.

In a short moment, the two, who collided, had to move back and Baek Ryeon-ha was looking stiff.

Even if she didn’t do her best, she wasn’t the kind to be pushed, so this was surprising.

“It isn’t that ‘You’ should be punishing me, but like the lady said, it is the Sixth Blood Star that was rude to the Blood Demon whom you need to punish.”

“I said it has nothing to do with you!”

Sima Young’s face turned cold at the words of Baek Ryeon-ha. Just the look at her eyes told me how angry she was.

Baek Ryeon-ha snorted at those words and on the other hand, Han Baek-ha couldn’t control her anger.

“How dare you! A captain, say such foolish things to the woman who holds the true lineage!”

With those words, Han Baek-ha broke off the fight with me and moved for Sima Young. But I moved in her way.

I was trying to get this solved in a good manner. But it didn’t seem like being nice was enough, so I ordered her in the most cold manner.

“I tried to listen to you thinking you were acting and speaking out of your loyalty towards the young lady, but this seems like outright making fun of my position.”

“I do not acknowledge you as Blood Demon….”

But she couldn’t speak. It was because I concentrated the will and exerted the power of Heavenly Authority.

As the will of Blood Demon progressed, her eyes trembled and my words reverberated.

“Step back now and I will pretend this never happened.”

“Does this mean that you will not accept the lady?”

“I do not wish to talk about it anymore. Last time. Please back off.”

“You overlook the words.”

As soon as I said it, I pulled out Blood Demon sword and struck it at Han Baek-ha which made her move as her hands tried to grab the sword, but her eyes widened.

As I pushed more, her knees bent down and the wooden boards on the ship were already cracking down.

Han Baek-ha tried to change the direction of the sword to escape, but even with her technique, she was no match for me, who turned into Blood Demon.

How much more would it be different if she was lower than this?

Without hesitation, I kicked her in the stomach

Her body bounced back at the hit and tumbled six steps back. Trembling, she immediately got up and began to drive out my internal qi from her body.

As she did it, the wooden boards cracked out beneath her feet. Han Baek-ha took the stance with her hands stained red and faced me.

She displayed the will to end it.

If she was going to be stubborn then there was no need to try and talk. If I listened to Han Baek-ha now, then I would end up being a Blood Demon who listened to others who corner me.

I raised my Blood Demon Sword which was shining red.

“Both of you, please stop.”

“We did not hear his answer.”

Baek Ryeon-ha pushed. However, Han Baek-ha seemed to have no intention of backing off. If she wanted to, she would have backed out in the first place.

“You are so tenacious.”

“What? The lady has a heart for you. Why do you hate being married for mutual trust? Through this, you can have more justification to be the Blood Demon…”

Han Baek-ha glared at her.

Normal people would never speak out when high ranking people of a sect were speaking, but Sima Young was confident.

Baek Ryeon-ha’s eyes shook at those words as she asked.

At those words, Sima Young’s face turned red. Even though she was confident to fight, confessing about her feelings in front of others was embarrassing.

Han Baek-ha added, as if it was absurd.

“Ha! The captain is really arrogant. No matter how rude I might have looked, it was for the sake of the young lady, I think of her being suitable for…”

At that time, Han Baek-ha went silent as no one expected it to happen.

Without anyone being able to notice, a man in black was standing behind her.

The cold voice which was like frost in winter. Enough to give rise to goosebumps–

The Blood Hand Witch who was shocked, tumbled back and threw her hand at him but the man caught it and pulled off the arm as he threw it away. 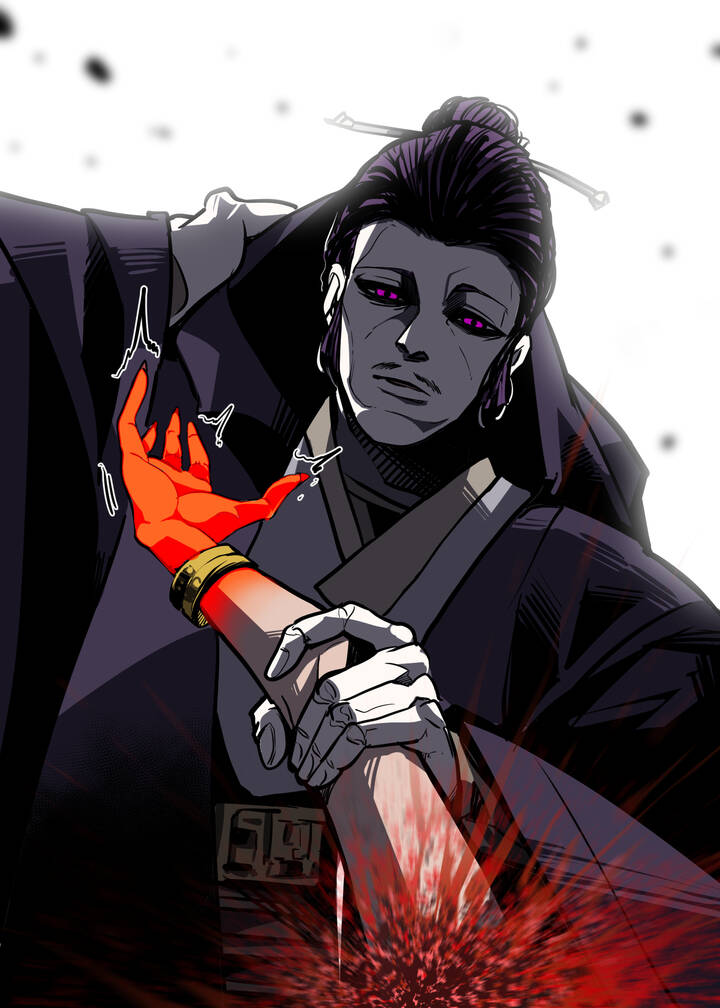 Her screams spread all around the river. The sound was so loud that members of the sect began to come up.

Everyone was visibly shocked at the situation of this unknown person in black cloth pulling out the arm of Han Baek-ha.

“You, how dare you come to this place!”

At those words the man in black robe snorted and took off the hood on him. He revealed his pale white face with a mustache.

However at the same time, Sima Young’s cry was heard.

The moment we heard it, both I and Hae Ack-chun went stiff. There was only one person she would call someone father–