‘That sword is strong?’

No, are you talking about that rusty iron sword? I’m very puzzled by what the Small Short Sword is saying, but Hae Ack-chun points his finger at the skull and says,

“That will be your teacher.”

When he pointed to the dead and called it my teacher, I felt thoroughly creeped out. And the skeleton wasn’t even in good condition. Despite being a third-rate warrior in my past life, I lived as a warrior, and I could tell a good-conditioned skeleton from a bad one. 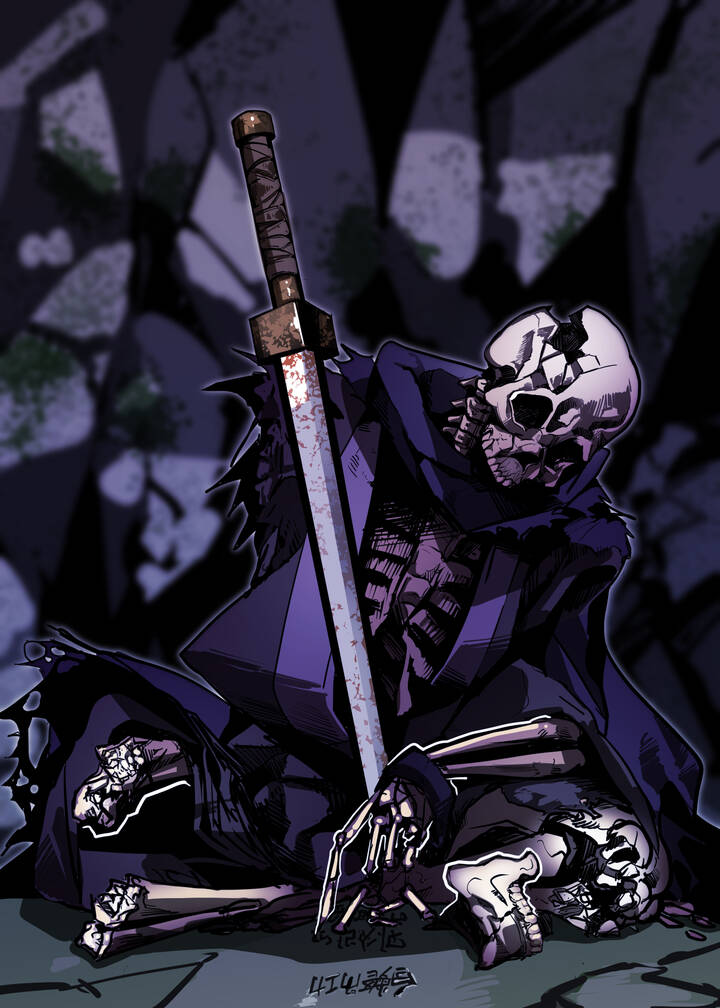 -The skeleton is missing one arm.

‘Not just the hand.’

The bones in both legs looked broken. To be precise, it looked like the knees were crushed, and at this level of damage, he would have been unable to walk until his eventual death.

Just what did this skeleton do to live such a life?

“He must be an idiot. To end up like this in a cave that people can’t even reach.”

There was something odd about calling the dead an idiot. Rather than laughing, I felt bad.

Hae Ack-chun took the lead and entered. And as we went inside, we walked through the skeletons.

I didn’t realize it when I saw it from the entrance, but words were engraved at the place where the skeleton’s owner had fallen. The writing looked like it was made using just fingers.

How powerful did the person have to be to engrave this on the ground?

“This is what you will learn.”

As Small Short Sword had said, the dead man was now my teacher. I had a gloomy feeling without realizing why, and my eyes looked at what he wrote.

The first words were as such.

I frowned at the words, which felt absurd. I thought I read it wrong, but no, the words I read referred to the destruction of the dantian.

‘This is why you brought me here.’

It was for this reason.

To learn this skill, you must either voluntarily or involuntarily destroy the dantian.

From Hae Ack-chun’s point of view, there was no need to create a dantian and to test this skill out, I was the most suitable person.

It would be a different story if I was someone who didn’t know martial arts, but I was from a martial arts family.

I know everything about the process, but I can’t cultivate,

-Then, the theory will move fast.

‘But I never heard of destroying the dantian to accumulate qi.’

Who would risk their dantian to learn this if that was possible? I had heard about life qi, but that was different.

And it was known that if people tried to learn martial arts without internal qi, they were bound to experience major side effects.

“What? Did you think I was going to test things on you?”

Okay, this man surely was reading my thoughts. And when I said nothing, he continued.

“Despite having fruit which the others cannot eat, you are full of doubts.”

“Who do you think is this skeleton?”

How could I know when I don’t see any badge or plaque? Just say it already.

In an instant, I had a terrible feeling in my stomach.

Whether he intended to say it or not, I was already on the edge of anxiousness. And even Short Sword already felt annoyed.

-Is this a new torture method?

Whether he knew Short Sword’s words or not, Hae Ack-chun continued.

“Do you know what Essence, qi, and spirit are?”

The first things you were taught when learning martial arts. Essence meant the process of polishing one’s self.

And the essence, qi, and spirit in martial arts were…

“Essence is here. The dantian.”

Hae Ack-chun pointed to his navel.

The qi was supposed to go precisely around in the dantian.

“Those who learn martial arts will purify their qi into their Essence through a cultivation method in their dantian. That is what internal qi is.”

I knew that too. This was also what one calls training.

You constantly trained, built skills, and one day realized and awakened as an expert.

This was what I was going to learn. I was taught that qi is innate in people since birth. All three are innate, essence, qi, and spirit.

“Half internal and half learned.”

“Spirit is the same, but the thing that sits in the middle of the body is called the innate internal qi.”

I remembered hearing about this. But I heard that innate internal qi was literally your life’s qi, so exhausting it would be like suicide.

“It is said that innate internal qi has twice the strength of internal qi built by a person.”

It was because it isn’t forcibly built but was innate, and from what I knew, that qi only had one use.

It was to be used to die with an enemy you cannot beat.

‘No, is he going to tell me that I need to deal with internal qi in the same way…’

As I worried, Hae Ack-chun smiled.

“You are lucky in that manner. It is because written here is a method that allows you to handle innate internal qi.”

‘Ah… he really doesn’t deviate from what I think.’

He was up to something.

There was no way that he, who was known to be strong, wouldn’t know what happened if such theories were tested.

“There is only one task for you. You need to learn it.”

“Did someone call you a genius or what? Start by feeling the innate internal qi.”

Learn to feel qi and then drain it. Even if I did manage to learn it and my qi ran out, I wouldn’t live long.

“If you cannot do it, I have no use for you anymore.”

This was truly a dire situation. The only difference was that my life was in danger whether I touched the internal qi or Hae Ack-chun killed me when I failed.

With those words, Hae Ack-chun was about to leave the cave.

“What else? You want me to stick by your side and watch over you?”

I shook my head. Having this old man next to me was like sitting on nails.

Maybe he was going to teach those twins.

“If you can feel the innate internal qi, you know where you should come back to, right?”

I hated how he was speaking so casually.

He looked back at me with anger as I didn’t reply.

I suppressed my anger. There was no benefit for me here if I showed my true feelings.

Instead, the way out was to get this done as much as possible and not express my true feelings.

He returned my question with another question.

“Aren’t you going to tell me about the presence of spirit?”

Essence, qi, and spirit, his explanation ended at just qi. At my question, Hae Ack-chun tapped his head with his finger and went out.

Hae Ack-chun, who was returning to his cave, was grinning. Judging from the kid’s expression, it felt like the kid knew what would happen if the innate internal qi was touched.

He was probably trying to use his head right now, but regardless, he would learn it.

‘I do feel pity. But if the words there are true, it would also be a blessing to you.’

Of course, if possible, he would be more suitable than So Wonhwi. Even if the dantian was broken, this was a secret that many warriors would like to covet.

As I read what was written, I was shocked. The technique wasn’t complete. It got cut off along the way because he died due to exhaustion.

When I saw this, I cursed aloud. The last thing wasn’t written; it just had to be the method to prevent the innate internal qi from becoming exhausted. That said, it was said that the qi can be stopped.

But here, it felt like it was cut off at the most crucial part.

‘You should have written it down first!’

This man was dead, but I couldn’t stop my anger. If I learnt this, it only talked about consuming the innate internal qi and not the method for recovering it.

I felt like I had to find a way.

I didn’t know when the time would be, but Hae Ack-chun would make me fight the twins when they were ready. And I cannot be running out of innate internal qi before then.

‘Should I adjust it to save qi as much as possible?’

-It is because you aren’t hearing me. Yah. How about we just ask him?

I had no idea what she was talking about.

-Ask him. That skeleton… ah, he is saying, brat, how dare you call my master a skeleton.

‘Wait, you… you are talking with the iron sword?’

-Yes. We can ask him. If he was with the skeleton all this while, then he may know… ah, seriously! It seems sensitive. How can I know if your master is Ho Jong or not!

For a moment, I was doubting what I was hearing.

-Why are you so surprised?

Anyone would be surprised by the famous swordsman who shook Yunnan with just one sword. He was such a great warrior that if he didn’t disappear suddenly 15 years ago, there was a widespread opinion that he would have become one of the Eight Great Masters.

-That good? No wonder the sword is acting like that.

If this skeleton was indeed the South Heavenly Swordsman, then this was shocking.

But how did a person known to have gone missing in Yunnan end up dead like this on an unknown mountain in Guandong?

‘Did that crazy old man do this?’

-That old man cannot beat his master, it seems.

Hae Ack-chun was one of the Four Venerable Dignitaries in the Blood Cult, and no one could defeat him.

Perhaps, it was to restore his honor. Regardless of the origin, most warriors were proud of their martial arts.

And no one liked to lose.

‘If he is the real Ho Jong-dae, then it is a good thing.’

Short Sword had said that the iron sword might know the rest of the cut text. It was like a miracle had come true.

I asked the short sword to help me ask the iron sword how to use the innate internal qi.

-Am I some matchmaker for a couple? It is right in front of you, so ask it yourself.

I took a deep breath.

I could only hear this one short sword.

It was impossible, yet I grabbed the sword without thought. And at that moment, a voice echoed.

-Haaa. A touch I haven’t felt in so long.

In an instant, my body trembled, and I released my grip around the iron sword.

‘W-what was that just now?’