The memory of getting into the wagon in my past life was clear in my mind.

My condition was no different from the other captives inside the wagon at that time. I knew the identities of our captors now, but the other kids had no idea. This was a situation where the future seemed dark and bleak.

‘Because the days of hell will begin.’

Their fear would soon turn into reality. I was a living witness.

-What do you mean days of hell?

Short Sword’s voice was ringing again in my head. It kept crying out all night as it complained about its broken tip. Now it was sounding a little calmer.

-How do you know what will happen?

‘What can you do knowing how I know?’

At my blunt words, the sword said.

-Shame on you. You owe me big time.

‘I already said I’ll get a blacksmith to fix you later.’

-It is more precious than life!

‘Your head is more precious than life?’

-You are too stiff. You and I are bound by fate. When you are having a hard time, I help you, and when I have a hard time, you suddenly change your attitude?

Look at this one. It could have spoken its way to the top if it was a human instead of a short sword.

‘Are you trying to persuade me?’

-Ah. Persuade? Don’t bother even thinking that. Huh? But I am curious.

Actually, I was still a bit overwhelmed with all that had happened so far. From the time I regressed to this present reality, I never had time to think about what had happened. I then stared at the short sword.

‘You won’t tell anyone, right?’

‘Are you calling me crazy?’

-Well, you are crazy with a bit of uniqueness

My mind wandered a lot at its words.

This was good. To get to the hideout of the Blood Cult, I had to stay in this wagon for a fortnight.

‘Did you know I was the trash of my family?’

Ha… this one seriously didn’t seem to understand!

What was I expecting from a short sword? I began to complain about my life. At first, I was planning to keep the story simple.

But as I spoke, the words began to change. I spoke of my life as a spy and things I never told anyone. Maybe this was why the things I kept in my heart exploded.

From the circumstances of being born to a servant, to being called trash by my family, to wandering away from my home, to being kidnapped by the Blood Cult, and finally ending up working as a spy, all of it came out in a torrent of complaints.

My entire rant lasted for half a day.

The life I had lived was very turbulent. The Short Sword then said.

-You have no skill in talking.

-Why are you arranging such a short story into a whole biography? When you do business like this, customers leave.

In an instant, I felt the urge to curse it. When it talked, it was funny, and when I talked, I’m just spouting shit? Ah, forget it, I should break this thing myself.

-Don’t do that. I am your mother’s keepsake.

Otherwise, I would have broken you in an instant. I didn’t like its reaction, but I still managed to confess everything for the first time in my life, and it felt good. However, things weren’t going too well. The Small Short Sword then said to me.

-Yah, wouldn’t it be advantageous for you to know what will happen?

-You know. You realize when bad things will happen in advance. You can avoid it… or make it better.

I was stupid. I was worried about how to deal with things I would need to go through again, but this talking sword gave me a different answer.

-Uh, that is true. But you are plain stupid.

Even at its harsh words, I still managed to smile.

I heard the sound of fists hitting the outside of the carriage. It was a warning for me to be quiet.

For a moment, I anxiously thought I had made a mistake. The Small Short Sword was right.

I knew what will happen in the future, and I remembered many significant events that will occur. This was a tremendous asset to me.

The Small Short Sword who told me this suddenly looked at me.

-Don’t look at me like that. It is burdensome.

This guy was an idiot. But it was good. As Small Short Sword said, if I could make things work in my favor, everything can end differently.

-What do we do? Are you going to escape and go home? Even if you are trash, you are fine.

I shook my head at its words. Escaping was impossible. The inside of the wagon was covered with iron bars. How can I get out? Besides, it was unreasonable to even think of dealing with the number of people guarding the outside.

-Then, what do we do? Are we going to Blood Cult? They are some scary brats.

-Then why go to the Blood Cult?

‘If we run, our lies will be exposed.’

I’ve already met one of the officials of the Blood Cult in this life. If I run now, would that man let me live in peace?

Instead, this would endanger not just me but my family too.

-You are quite the goody-two-shoes.

-You were ignored for being a child of a maid. It shouldn’t matter if the family is going to end up in ruins.

‘If it has to be ruined, it should be done by me.’

I couldn’t let that deed fall into the hands of the Blood Cult. Even though he was head of the house, the lord did treat me fine as a child.

I didn’t respond back.

Because Short Sword was right. My only remaining blood relative, my younger sibling, was still in the family.

-Then will you head to the Blood Cult like this? What is going on in your mind?

While it continued to ask about my plan, I said.

‘You, what is the most embarrassing thing in my life?’

‘Being swung around by some third-rate warrior!’

My life would have been different if this dantian of mine hadn’t been damaged.

A third-rate warrior, who couldn’t even gather internal qi, damaged him to the point of being expelled from the family. The result of which led to his eventual kidnapping by the Blood Cult to be used as a spy.

I had been swayed around all my life, and I didn’t want to live like that anymore.

-Right, okay. Everything is fine, but what will you do now?

‘I will change it from now on.’

-It can happen, and you can change. To live without being swayed around by others, you need to learn martial arts. But by what means can you master martial arts without internal qi and a broken dantian?

There was one incident that happened before I joined the Blood Cult. If I hadn’t missed that chance, I wouldn’t have known that a broken dantian could be saved.

‘If I am lucky, I might be able to learn cultivation.’

It’s not easy. If I was not lucky, I was bound to fail.

And I would miss the chance to restore my dantian.

-Hmm, there is one. If you can master martial arts, I can also teach you the martial arts of my former owner if you want?

I felt strange as I heard it ask about teaching me martial arts. Come to think of it, I was only able to live because of this dagger. I wonder why it felt so natural for it to respond. It must be because of its former owner that it can know martial arts.

-Ha! Have I lied to you? I will teach you what is the problem here?

I didn’t say anything and listened as it began to tell me about the martial arts. It was, obviously, martial arts for short sword users.

I was surprised as I listened to its words, and a strange feeling hit me.

It’s not a huge deal, but I was shocked at how suddenly this was happening. I shook my hands to try to put out the flames, but it was futile.

Even stranger was that the flames did not feel hot. Then suddenly, a voice echoed in my head.

[Now that you have acquired the Sword Heart, the Tianshu (Big Dipper) will open.]

This was not the voice of the short sword. At that moment, the blue flame flaring from my hand began to subside. As I looked at the back of my hand, wondering if I had been burned, the fading flames were sucked in.

A blue dot appeared at the point where the flames were sucked into the back of my hand. But it wasn’t just simply blue dots that appeared.

I’m not sure, but there were 7 dots on the back of my hand. To say that it was normal made no sense, but the position of the dots were similar to the Tianshu (Big Dipper) constellation in the night sky.

One of the seven dots on the back of my hand was blue. 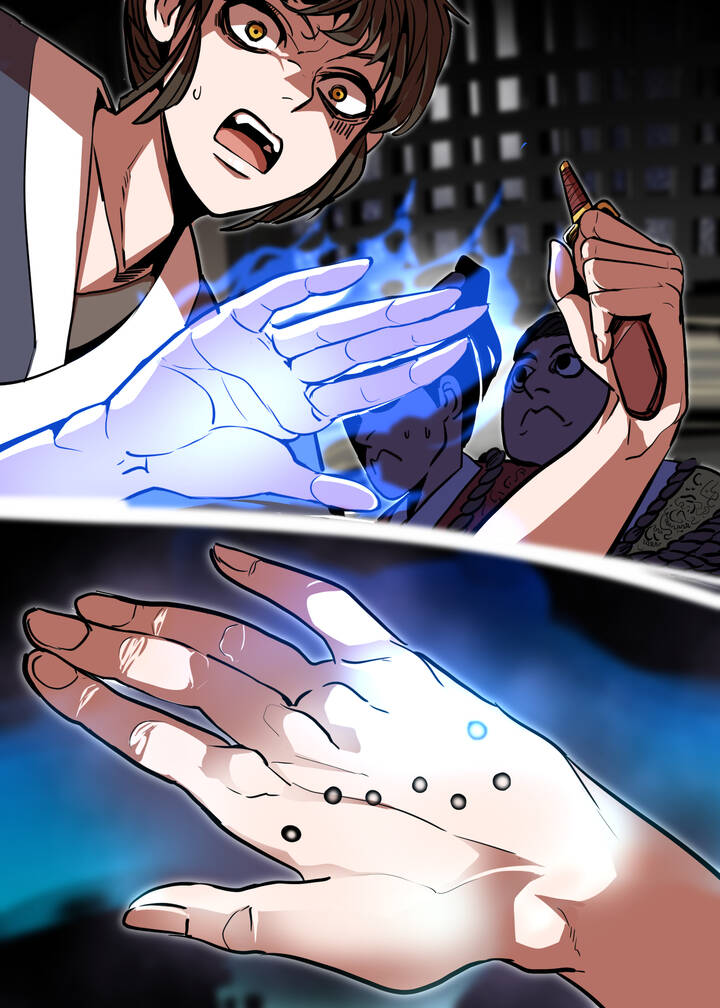 The location is the celestial equinox, which corresponds to the first star of Tianshu.

I can’t understand why this is happening so suddenly.

It is difficult to guess why this is happening. Then, suddenly, swordsmanship comes to my mind. Come to think of it, a clear inscription on the record of Sword Immortal mentions this star. Did that have something to do with this?

At that moment, the sword speaks.

-Why aren’t you concentrating? I am being generous here by teaching martial arts to you, and you keep waving that hand like a crazy man.

‘Didn’t you just see that?’

‘I had something like a blue flame on my hand.’

-Are you hurt somewhere?’

The short sword was utterly unaware of the blue flames on my hand and thought I was waving my hand like a mad man.