[Please stay here, I will not ask you to like me. I hope you will think of yourself and the child you carry.]

The scene unfolding before me was So Ik-heon holding my mother’s hand while attempting to convince her to stay.

The voice of Blue Decree could also be heard,

-I do not know what this is…

‘You are seeing this too?’

-Right. It is my memory of that time

My mother and the Lord appeared very different from how I had last remembered them. My mother appeared much younger and beautiful while the Lord looked young.

Soon the scene continued and my mother asked,

[Is it fine to entrust myself to you?]

At her words, that man smiled brightly. His joy was evident from his face.

-What you’re seeing now is when your mother was declared the second madame.

If what he was saying was true, then I was looking at a memory. Soon, the scene in front of me faded.

-I don’t know what that was, but I think you saw my memories

I glanced at the back of my hand, the third dot had faded back to its dull blue.

When the second dot had formed, I was able to hear the sounds of swords from a distance, and now I had gained the ability to view their memories.

I concentrated, seeing whether I could examine his memories again. However, the scene I wished to see never came.

-What were you trying to do?

‘I was trying to check his memory again’

-What memory are you talking about?

‘The face of the Lord when I was born…’

He fell in love with my mother and even let her have a son, and accepted her as his second wife.

I wondered what face he made when I was born.

-You are speaking about this?

Just then, my vision turned black and the scene I wished to see unfolded…

There was So Ik-heon who was holding a baby…

His expression was a mess as if there was so much he wanted to say but with no words with which to speak.

Right, knowing that the child wasn’t his own, why would he smile?

My mother was laying on a bed looking quite pale. So Ik-heon erased his complicated expression and spoke with a soft smile…

[I will treat this child as my own. So my Wife, please take care of your health and recover soon]

When I had seen the first scene, she looked as if she didn’t want to burden him, but now it appeared as if she was emotionally dependent on him. 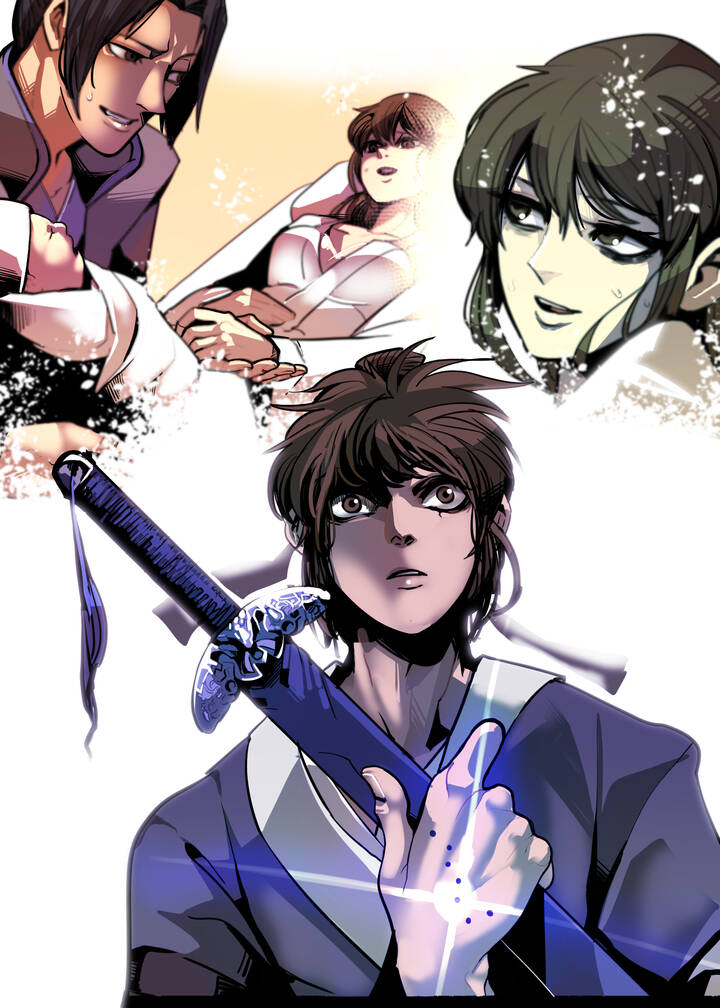 -Your mother opened up her heart to Ik-heon’s devotion.

My mother liked him….?

But then Blue Decree Sword said,

-And so your sister Yong-yong was born,

If my mother had truly only stayed to protect me then she wouldn’t have had another child.

Then I was the only one in this house who didn’t share any blood with the master of the house.

Said Blue Decree, and then the scene faded and we were brought back to reality.

It seemed I could only see what the sword wanted to show.

-When you were first born, Ik-heon tried to be nice to you, but it wasn’t that easy.

It was tough to raise someone else’s child as their own.

-Besides, it wasn’t too easy to bear the words of the first madame

-If she saw him acting nice to you, she couldn’t be calmed down. Thanks to this, Ik-heon was no longer kind to any of his children.

Looking back, this man treated all his children harshly.

But beyond this harshness, was an abject coldness that was directed only at me. It must have come from the frustration of raising a child who was not his own.

Even when my dantian was destroyed, I understand why things had turned out like this.

He would send elixirs to my mother, but he didn’t even bother sending a physician to check on his child who had lost their dantian, all because I wasn’t his son.

I began to walk toward So Ik-heon, I was angry and enraged.

As my emotions rose Blue Decree Sword tried to dissuade me again,

-Still, Ik-heon tried to take responsibility for you and your sister till the end!

‘Responsibility? Is that so? Is that why he kicked me out of this place and tried to marry off Yong-yong like she was some livestock to be sold off to the highest bidder!’

He was acting cold because of the First Madame?

If that was the case wouldn’t it be better to not take my mother in!? Does he think that I would sit still if you spoke about him taking responsibility for us?

-… it is because he thought that if you weren’t sent away from home, you might die at the hands of the other children and his wife,

‘Die at their hands?’

-After your mother’s death, you began to drink a lot, child you were pretty much wasted all the time. Rumors spread. No one would be punished if they killed you off quietly, that was why Ik-heon was forced to send you away.

-Same went for your sister. Why do you think she was sent to that mountain sect? Is it because she was extremely talented? No. It was to prevent his wife from trying to do anything to harm her. If Yong-yong came back she would experience what you went through, which is why he found her a fiancé

‘Seriously, that man though?’

I remembered Jo Sang-nam and the fact that the man was related to Madame.

-It was the Madame who had asked for the marriage proposal, but Ik-heon had no intention of giving his daughter to that man.

Blue Decree said it to be. It was like it was trying to make us understand,

But how do I overcome my emotions? I don’t think I will ever be able to understand So Ik-heon for the rest of my life.

-Sigh. Right, as you said, that guy wasn’t kind, he couldn’t even do his role as a father right due to the secret of your birth. But at least he didn’t turn his back on you…

And then I saw something again

The backyard of my mother’s annex.

I saw the Lord hold out his hand and place a silver plaque in Asong’s hand.

In the middle of it was written Hye-hyun, which looked like it was a card my mother’s sect had given to her.

If I had it, maybe I could trace it back to the Harmony Sect; the plaque looked like it belonged to that sect.

[If something bad happens while you have this, use it]

With those words, Ik-heon left, and I noticed two things.

As said, apparently Asong wasn’t my servant, and I had no idea he would be taking care of me for some other reason.

It had been late at night, but now there was bright daylight, slightly obscured by greenery.

In front of me was Asong with blood and bruises all over his body,

[… Wonhwi actually said it was the Blood Sect?]

[Yes yes. He must have heard something.]

[Do you have the plaque I gave you?]

At So Ik-heon’s question, Asong pulled it out from his sleeve and So Ik-heon nodded.

[You should right now head to Mongok-ri valley and find a place that serves alcohol there. Talk to the old man with black clothes all over and when he says ‘Fishing For’ you say ‘Sweeping away Worry’. And after handing it over, tell him what you just said to me, and then ask to find where So Wonhwi is.]

It was actually from a verse that said that those who believed that alcohol could sweep away the worry, so you should fish for it.

I didn’t think that So Ik-heon would reach out to the Lower District Sect for information, considering it usually sided with the unorthodox sects.

Looking at this, he could have been keeping track of me,

Once again the scene changed.

The place where the old man in black clothes was drinking alcohol. In the scene I had just seen before, Asong was given the order to come here.

Then why did the Lord come here in person?

So Ik-heon asked in a cold voice.

[Why did you not accept the quest?]

To this, the old man answered firmly.

[Didn’t I say I would pay any price?]

[If it is related to the Blood Sect, I will not accept any requests.]

So Ik-heon touched his sword and the old man in black smiled showing his yellow teeth,

[It wouldn’t be good for it to be known that the Ikyang So family lord had requested information from us, the bad people.]

So Ik-heon pulled back the hand and stood up irritated. And the old man in black told him,

[I heard that he was abandoned on your orders, but it looks like you are biting your finger sore for him, Lord So.]

[Do not mess with me]

[Still, I received an advance payment, so I will give you some small advice]

[As I said, if what happened there was done by Blood Sect, give up.]

[They secretly kidnap kids to increase their numbers. So it would be easier to think that your son is no longer in this world.]

I think I know now.

Because of this, he thought I had become a member of the Blood Sect. The scene changed once more, and we were back in the training room.

Blue Decree Sword said to me,

-I understand that you hate him. but, I hope that you can understand his feelings a little bit more now.

At his words, I sat down. My mind felt complicated.

Knowing so much I wasn’t sure how to accept this.

And the truth surrounding my birth was the most shocking.

‘In the end, we were strangers.’

What the sword said about him doing his duties. But my thoughts were different from his.

Be responsible for me?

‘It was his actions for the sake of my mother.’

If he was being responsible for me, he would be watching over me and my sister and giving us support when we needed it.

In the end, the man named So Ik-heon just did what was comfortable for him. He did it to such an extreme extent that he raised children who weren’t his. It seemed impossible to understand his thinking.

From the start, he should have never promised my mother that he would treat me like his own.

‘Responsibility? It makes me laugh’

Blue Decree could see this, and it said,

-From what I said earlier, you seem to want to represent the family during the tournament.

That had to be obtained.

Just because I was upset, I still had to do it.

How could it help?

-Wouldn’t it be a different situation if you gave Ik-heon what he wanted the most?

‘What does he want the most?’

-Now, Ik-heon only learned the first half of the Sodong Sword

-This sword technique was passed down orally, but the former master wasn’t able to fully teach him as he died in the war. What if I told you the rest?